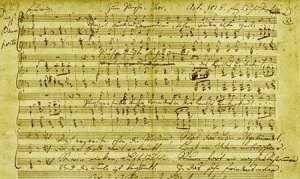 The opening lines of Tomas Tranströmer’s poem ”Schubertiana” from 1978 are:

In the evening darkness at a place outside New York, an outlook where
you can perceive eight million people’s homes in
a single glance.
The giant city there is a long flickering drift, a spiral galaxy
from the side.

But soon, after the snapshots of the grim and chilly human conditions of the giant city, the first part of the poem ends with these relief-giving lines:

I know too – without statistics – that Schubert’s being played in
some room there and for someone the tones at this moment
are more real than anything else.

A radically different scene is depicted, and suddenly the attention is directed differently; a detail dashes in which makes everything else insignificant. The zooming-in catches a spark of life in the middle of the concrete urban landscape.

It is later on in the poem, that after having enumerated some of daily life’s inevitable worries, a stunning image appears. The music makes us, the poem whispers in our ears, believe in something different, something more urgent and important – and Schubert’s string music escorts us a part of the way there.

Like when the light goes out on the stairs and the hand follows –
with confidence – the blind banister that finds its way in the
darkness.

Thus, the invisible becomes concrete and the hidden truths become discernible. It is a vision that interprets the world.

Perhaps it is this curious view of life, shaped with such visual exactness, and at the same time, with quiet matter-of-factness, that draws ever more readers to Tranströmer. His poetic investigation of the complex human identity, as well as his construction of bridges between nature, history and the dead never results in structured patterns or in loud-voiced confessions. His poetry is a tranquil affirmation of few words.

The lure of existential secrets, the sensibility to our inner sources of energy, is invoked by Tranströmer’s concreteness. No sweeping statements, no abstractions. By recording the particulars of the physical world, wider connections can be perceptible and the liberating insights can emerge.