The other day, a friend gave me a card from master woodcarver Robert Jones of Thomaston depicting a working French horn that he had made out of wood rather than brass. (Search for “58scallop” on YouTube to see it yourself.) The instrument is most certainly a tour de force, but I was wondering why anyone would go to all that trouble.

Then I looked at it from a little distance and found that the French horn is a work of art in itself, aside from the sounds it makes. The contrast of multiple curves, bell, circles and straight lines is somehow deeply satisfying. 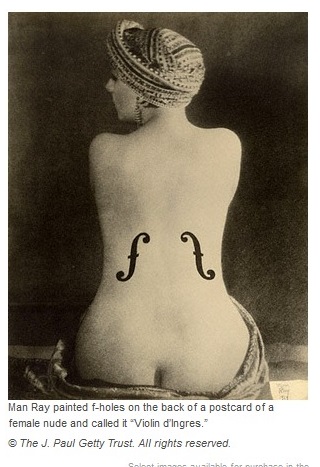 Perhaps Jones’ next endeavor should be a tuba, which artist Rene Magritte turned into a collection of intestines in his painting “Le temps menacant.” Jones has already carved a working trumpet and trombone.

Perhaps aesthetics has as much to do with the design of an instrument as sound quality. There is really no acoustic reason why a violin, viola, cello or bass viol looks the way it does except for its resemblance to the female form. Near-perfect violin forms have been found from the Cycladic period of Greece (5,000-4,000 B.C.E.). They are thought to have been idols of a mother goddess.

Artists and musicians have always known this. Witness photographer Man Ray’s alteration of a postcard entitled “Violon d’Ingres,” by painting f-holes on the back of a female nude. Ingres has the first laugh, however, with his portrait of Paganini cradling his violin.

The harp is yet another ancient shape, reduced to its most basic form — a triangle with a curved hypotenuse, depicted in another Cycladic sculpture from 3,000 B.C.E. The modern harp has more florid decorations (the frame of the Cycladic version is a snake), but even the most primitive have bells and whistles that have nothing to do with the sound.

The woodwinds have their own beauty. I like to have a flute on the mantelpiece even though I can’t play a note on it, as an example of the aesthetic appeal of the machine. The bassoon, the oboe and the clarinet are also works of art that have evolved from simple origins, both musically and aesthetically.